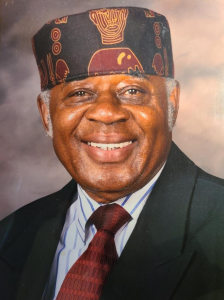 Dr. Frazier Todd, Sr. transitioned to be with his heavenly family on October 26, 2020. He had been practicing podiatric medicine for over 47 years.

Dr. Todd was dedicated to serving his community. During his nearly five decades of service, Dr. Todd found joy establishing close relationships with his patients and their families. He was known as the surgeon who would pray with his patients before surgery.

Not only did Dr. Todd serve his patients with unmatched excellence, he also served his Country and was a proud veteran. He served in the United States Army for over 26 years, retiring as a Major. He started his career in medicine during his military service in the 1960s and graduated from the California College of Podiatric Medicine in 1972. After his residency, he kept true to his promise of never forgetting his roots, moving back to his home state of Georgia to start his private practice in 1973.

Dr. Todd loved to read and fulfilled one of his life’s goals of becoming an author with the publishing of his autobiography, “Blessed from the Beginning”.

Dr. Todd was consulted by medical specialists nationwide and taught classes on medicine and nutrition. He was an icon, a Titan in the city of Atlanta. He was a staple of the community, serving as Senior Pastor of Church of Hope Ministries. He was a mentor to podiatrists, other medical specialists, pastors, businesses, and students all over the country.

Dr. Todd was also a proud father of six.

Dr. Frazier “Ben” Todd lived life to the fullest, sharing wisdom and love with all he came in contact. The greatest honor to be bestowed upon him in his passing, is for people to emulate his steadfast commitment to excellence and to do so with the same level of humility, kindness, and devotion that marked his great life. At the request of his children, Dr. Todd’s High-school Alumni Association established a scholarship fund in honor of his legacy.

Request Your Appointment Today!
(404) 334-0696
Call Us!
Font Resize
Contrast
Accessibility by WAH
Call Us Text Us